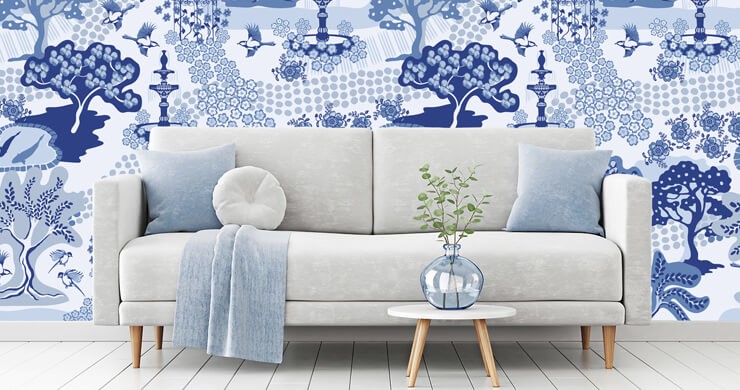 Trendy Wallpapers For an Instagrammable Home!

Interior wallpaper is having a bit of a moment right now. Bold, assured, and brimming with confidence – it’s the best way to decorate your walls if you want to make a statement.

To understand how we got here, let’s look back at its brief history…..wall coverings were first used in the 16th Century and by the start of the 20th Century they were everywhere, in both the poorest and wealthiest homes. However, by the mid-20th Century, paint was replacing wallpaper as the most popular decorating option. In the 1960s, wallpaper had its major revival, and this was followed by another comeback in the 1980s…

But today, wallpaper is undergoing something of a full-blown renaissance. If you’re looking for ways to elevate your interiors and make your home 100% instagrammable, wallpaper is the way to go.

Here are five trendy wallpaper styles that will get all the likes, shares and follows!

Tiger wallpaper inspired by the likes of Gucci 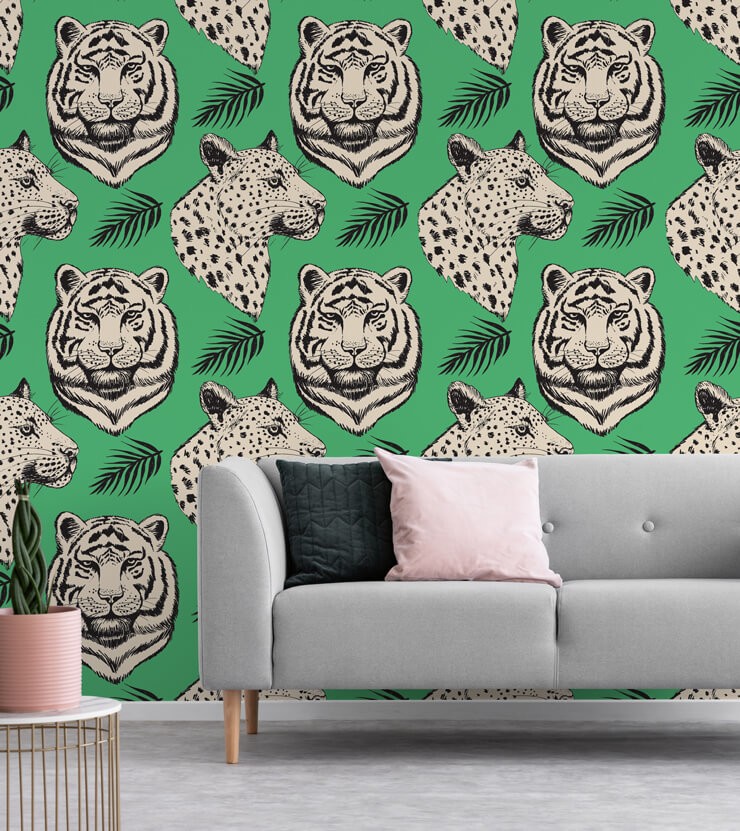 In recent years, we’ve seen a lot of different wallpaper designs that celebrate nature. And we’re not just talking leafy botanicals or interior design’s undying love for jungle culture. We’re referring to the kings and queens of the wilderness – yes, actual royalty. By this, we of course mean the big cats, the predators, the rare and ethereal beasts that we can only dream of getting up close with.

Tigers are among these beautiful creatures that roam in the wild and hold an incredible amount of power in the animal kingdom. These strong felines run at speeds of 40 miles per hour, can jump up 16 feet high in the air, and have razor sharp teeth to grab moving prey.

They also have the most magnificent coats, with a pattern that has been adored in fashion for many years. If you are inspired by the tiger craze, try our Green Tiger Leopard wallpaper. 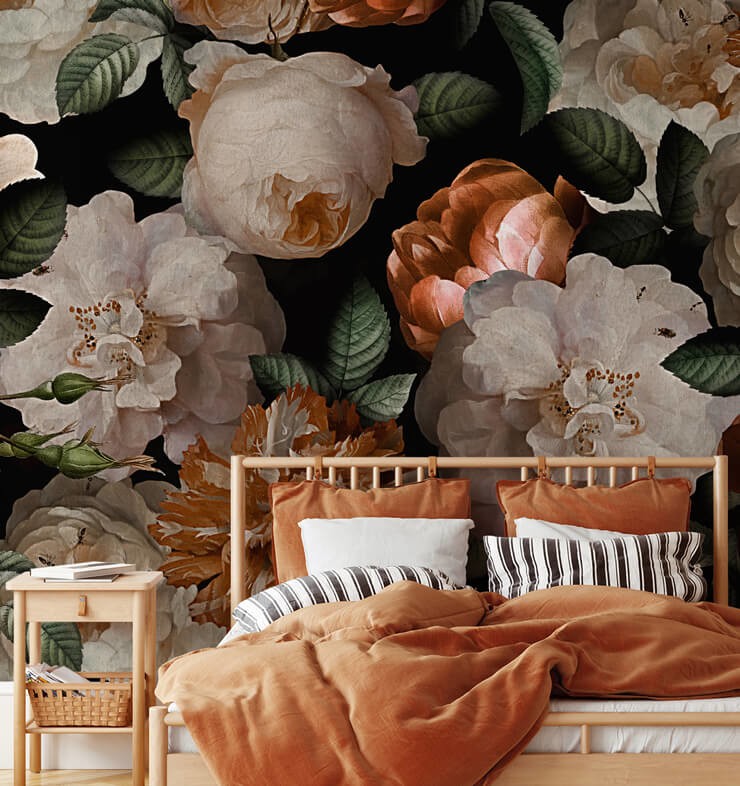 Floral print is certainly nothing new or ground-breaking. In fact, it’s been done time and time again (yawn) and we all know it. But let’s get one thing straight here – florals never lose their wow factor. The beauty of flowers can also be presented and interpreted in so many different ways – so we promise if you do florals right, you’ll never get bored.

If you’re worried about being predictable, opt for this year’s hot oversized floral trend to make your home stand out. Think big, bold botanicals. Floral fractals that take over a room. Powerful petal prints that demand attention as soon as you walk in. This year, we have no patience for small and subtle – so go life-sized instead.

This Mellow Florals mural may be slightly muted in colour, but don’t let the name fool you. These are badass botanicals that scream “look at me”. So you won’t need much else in the room to create the right ambience.

Oversized flowers like this work especially well in the bedroom, offering a touch of romance without being boring. 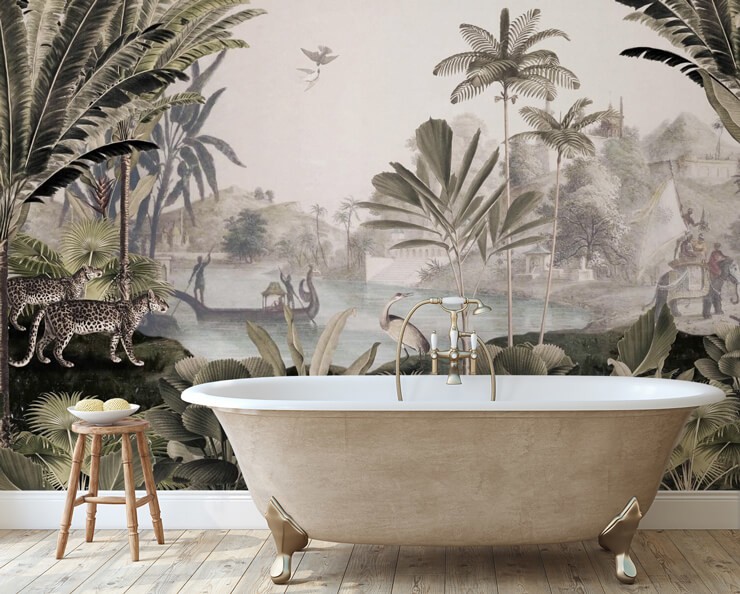 Perhaps it’s the aftermath of the pandemic. Perhaps it’s the global shift from minimalist to maximalist design. Or maybe it’s because wallpaper is going through a rebirth, and people are getting more and more daring with their design choices. Whatever the reason, scenic wallpapers seem to be all the rage at the moment.

Artsy scenic murals are being used to transform rooms into whole new worlds, transporting you away from humdrum suburbia to a tropical forest, a wild jungle, or a journey on safari.

These murals can depict nature, animals and people. They can tell fascinating stories of life somewhere less ordinary, and can be the perfect inspiration for those who travel. And to really feel their full narrative, don’t just use them for a feature wall. Why pick one when you can embellish all of your walls?

This trendy wallpaper trend works well in the most unexpected spaces too, such as a bathroom, utility room, or the poky downstairs toilet you’ve never known what to with. 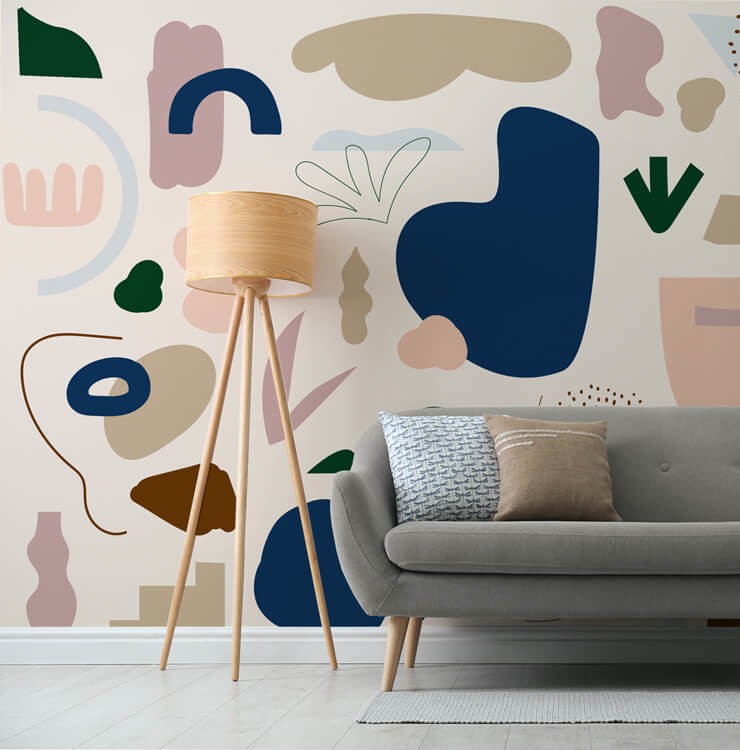 Mural in photo: Elements of Shape

Abstract shapes, interesting geos and a nonsensical pick ‘n’ mix of patterns can be a great way to make your home worthy of Instagram followers.

Funky retro wallpaper styles have certainly made a comeback in recent years, since mid-century mod became a serious thing. But the interior design world has been getting experimental, turning classic prints and patterns into something that’s just a bit more challenging to the eye. Because that’s kind of where we’re at right now…homeowners don’t need to be patronised, and trends don’t need to be dumbed down or simplified. People are clued up and they don’t want mainstream.

If this Elements Shape wall mural goes against your brain’s need for order, and if it pleases you while also puts you slightly on edge, that’s a good thing. Thought-provoking and conversation-starting beats predictable and samey any day of the week. 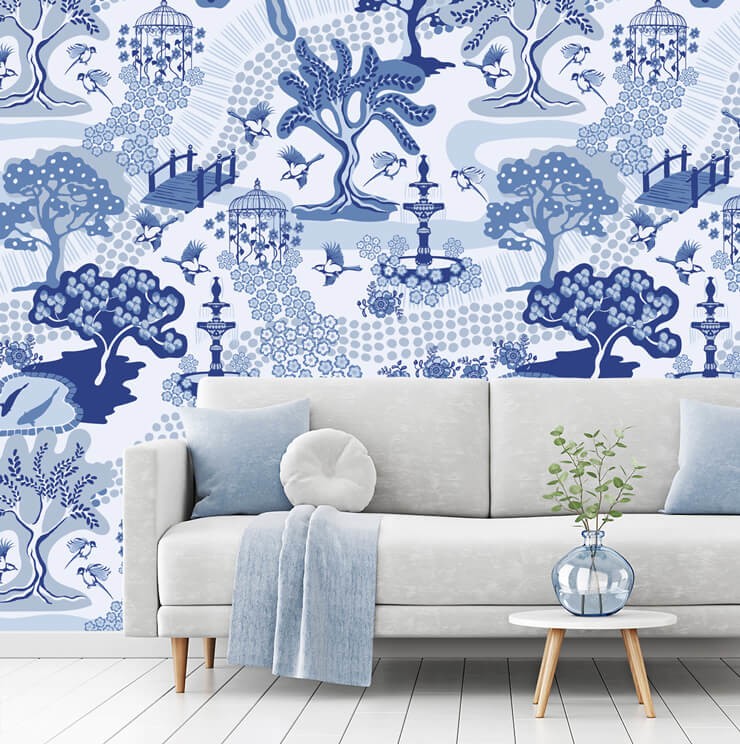 Toile de jouy was a French obsession that began in the 17th Century, very much inspired by the Indian chintz fabrics that arrived in the country around that period. Like the rest of the western world, they were also romanced by the Orient, and this heavily influenced French fabric design for centuries to come.

One of the French fashion houses that has championed this print timelessly for many years is Dior. From the salons at 30 Avenue Montaigne to the recent capsule collections, Dior’s Toile de Jouy pattern has always been iconic.

If you want a Dior-inspired look, there are many styles of chinoiserie wallpaper to be explored. Or you can simply opt for blue and white china pattern-inspired or botanical-inspired murals, such as murals from one of our featured designers, Tashi Tsering.

Do you love these trendy wallpaper styles that people are raving about right now? Let us know your favourite one in the comments below, or tell us what hot wallpaper trends you’ve seen on Instagram lately… 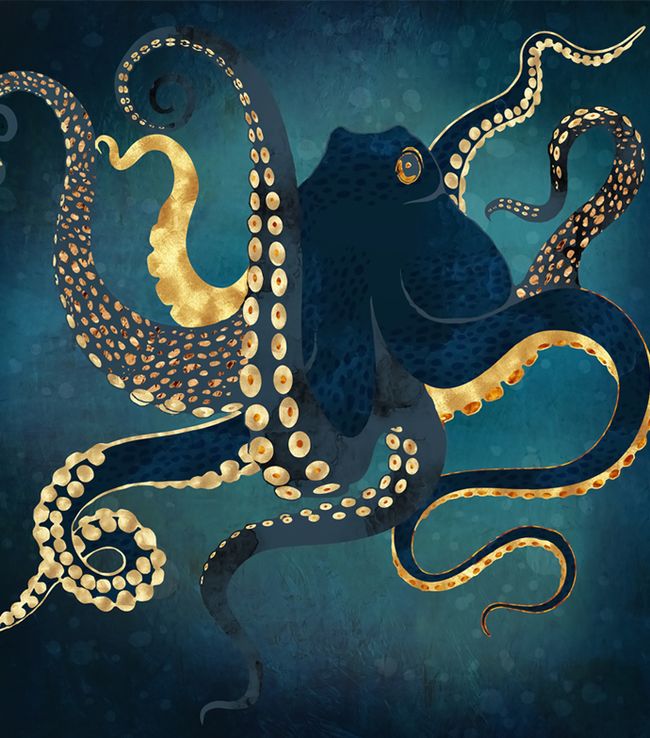 10 of the Best Ocean Wallpaper Murals 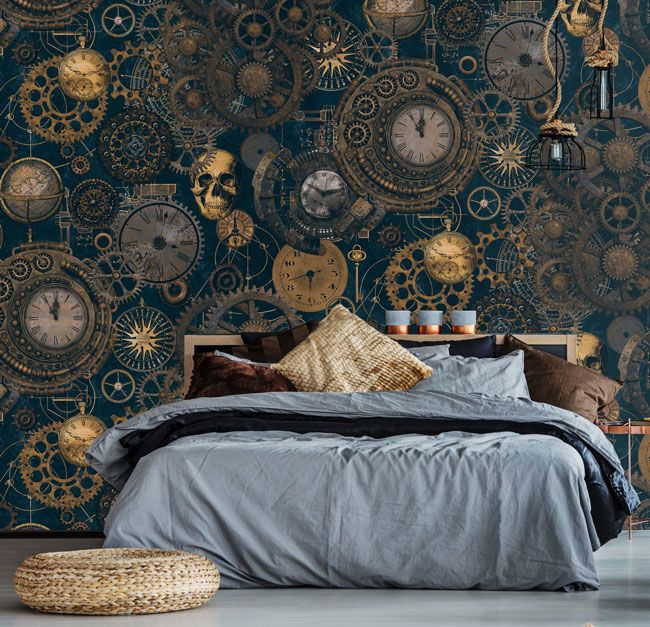 Stunning Navy and Gold Wallpapers For Every Style 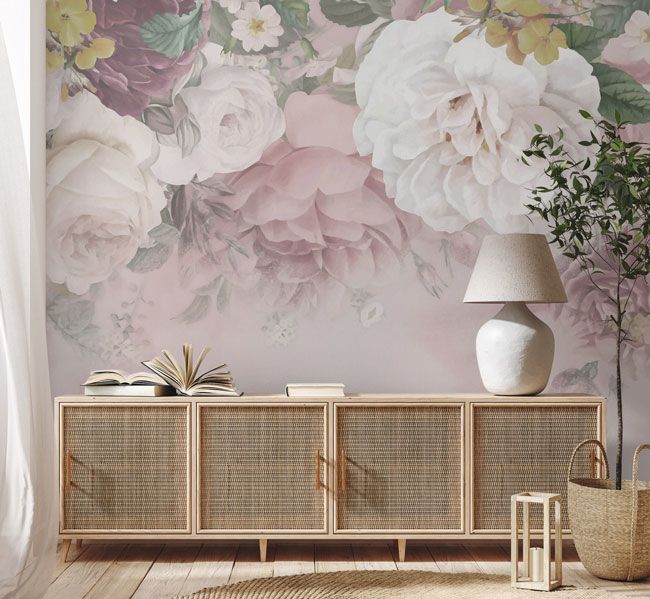 The Rattan Trend: How to Style in Your Home 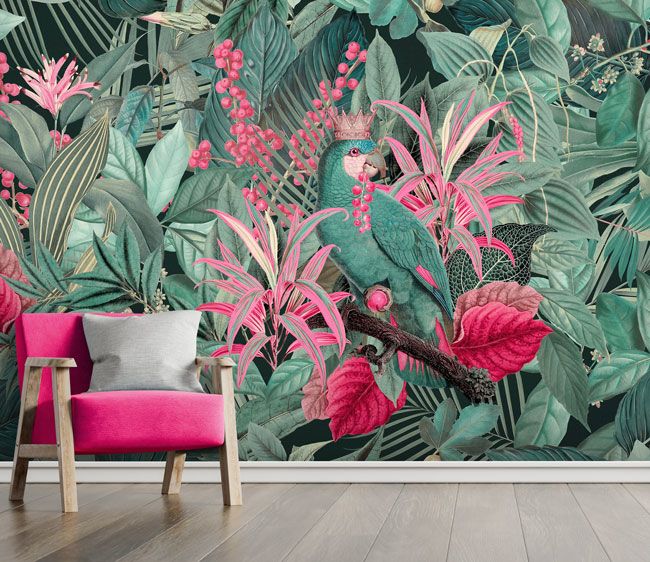 6 Wallpapers for Pantone's Colour of The Year 2023